Feature on the Graham family, Dougie and Lynda, and sons John and James 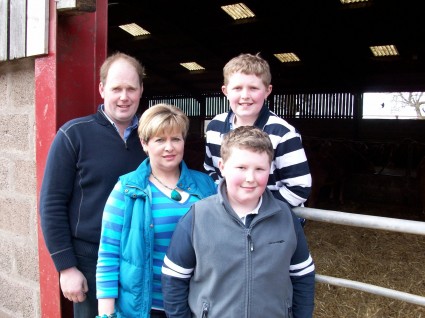 Most farmers eagerly await a cracking good day out at Scotsheep, but this year’s event, hosted by Graham family at Mains of Burnbank, Blair Drummond, Stirling, on Wednesday, June 2, is likely to attract more than just sheep producers – Limousin breeders will also be out in force to catch a glimpse of the family’s highly prized pedigree Burnbank herd.

Well known throughout the livestock industry, the Grahams – Dougie and Lynda and sons John (13) and James (12) – must be one of the most enthusiastic farming families in the country, showing pedigree Bluefaced Leicester, Blackface, Texels and Mules with notable success, from their 400-acre unit at Mains of Burnbank, which runs alongside a further 260 acres of rented ground at Munnieston.

However, while the boys enjoy showing sheep the most at present, Dougie and Lynda are reaping the financial rewards and reduced workload of breeding top quality pedigree Limousins compared to running a bigger commercial cow enterprise.

“We can make just as much money, if not more, from our 100 pedigree Limousin cows compared to the 150 commercial cows we used to have here,” said Dougie, who previously bred a lot of Limousin cross show calves that were either sold privately for further showing or went on to win top awards in the pens of four classes at Caledonian Marts’ calf show and sales at Stirling.

“Our pedigree Limousin cows are also better females than the previous three-quarterLimousinand Simmental cross cows we had because they’ve got more size, shape and milk and they produce calves that are worth a lot more at the end of the day.

“Pedigree Limousin cows also tend to last longer – we’ve got one born in 1992 and she still produces a calf every year – and they’re easier managed. Our cows are quieter than our old commercial herd but then we never keep anything which could cause problems,” added Dougie who was always keen to start up a pedigree high health Limousin herd and produce breeding stock.

Admittedly, their change of policy was expensive, however the family was extremely fortunate in that they were able to sell their commercial herd as part of the re-stocking process during the horrors of foot and mouth in 2001. At the same time, they got the opportunity to buy two of Scotland’s top herds privately.

This included Jim McFarlane’s Balfunning herd from Balfron, which comprised highly prized bloodlines from the Newhouse, Westhall, Broadmeadows, Oakley and Rawlsbury herds not to mention two of the lead show cows at that time, Broadmeadows Tansy and Hampton Nadine. And, just six months later the Grahams bought TK Estates’ 27-cow Keybrook herd plus calves, from Alyth.

That was during 2001/2002, and now almost ten years down the line, more than 75% of the Burnbank herd is home-bred having initially relied on the former commercial stock bull, Ronick Javelin along with some of the best AI sires available. But it was the purchase of their first pedigree stockbull, Grahams Tycoon for 16,000gns as a 14-month-old calf at Carlisle in 2003, that has really allowed them to step up a gear, with the Burnbank herd having dominated the Scottish Limousin herds competition in recent years, winning it outright in 2005, 2006 and 2008, while in 2007 and 2009 it stood second in the large herds section. 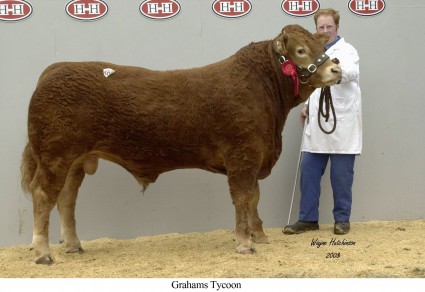 “Tycoon has been the best and most consistent breeder we’ve ever had – he had good figures and he bred good heifers and bulls. He has done as much for us in the past six years as others do in 15 years, but, he was also the bull we needed most to suit our cows at the time,” said Dougie who admired the youngster as a calf at six weeks of age, at Robert Graham’s farm at Airthrey Kerse, Stirling.

“Tycoon was on the go at the same time as the 55,000gns Grahams Samson, but I could never see Samson the same way. Tycoon was just what we were needing and he is out the good French-bred mother, Hardie. I go a lot on family lines buying a bull and I always like to see the mother,” Dougie added pointing out that the average EBV of the herd has increased from 12 to 27 having used Tycoon throughout much of the herd.

Not surprisingly, his progeny is proving a force to be reckoned too having bred some of the lead show females at theHighlandlast year, where the family showed five home-bred Tycoon daughters all of which scooped second or third prize rosettes.

More importantly, the Graham’s initial investment is beginning to pay off with the first Burnbank bull sold at auction, Burnbank Vice, by the French sire Samovar and out of Balfunning Fortune, making 8500gns, while at the bulls sales at Perth and more recently, Stirling, the family has produced two junior champions and a reserve overall which went on to sell to a top of 6500gns, for a Tycoon son.

Pedigree heifers sold at auction are also making their mark, with the first batch of 11 yearlings sold atCarlislein 2006 cashing in at £2100. That sale also produced the 1800gns Burnbank Adele – another Tycoon daughter – purchased by Robert Graham, Airthrey Kerse, which went on to produce a 26,000gns bull for his Grahams herd.

Burnbank Limousins not suitable for selling as breeding stock have also hit the headlines in recent months, with 10-month-old bullock calves and heifers all selling for more than £2 per kg at Caledonian Marts,Stirling. The dearest, a pen of four bullocks passed the weighbridge at 360kg and sold for £960 per head.

The difficulty now is sourcing a new stock bull to replace Tycoon, as neither Dougie or Lynda, who works four days a week, as office manager at Caledonian Marts,Stirling, are keen to share a bull, which reduces the cash available when there is so much outside money within the breed. Instead, the family has had to rely on AI in recent years, or home-bred Tycoon sons, until a suitable replacement can be found.

In the mean-time, they’ll just have to sit back and concentrate on how to achieve on their main ambition – to have one of the best Limousin herds in UK which not only looks the business but also breeds some of the leading Limousin cattle around.

“We’ve a lot to learn, but ideally, we want to have one of the best herds in the country and one that has a reputation for breeding good stock that will go on and ‘do’ with people,” concluded Dougie, who was keen to stress has learnt a lot from free-lance stockman Alister Wyllie, who up until his new position as farm manager at Dumfries House, assisted the family at busy times.

Now, it’s even more of a full-time hands-on family business for all, including young John and James, who are already desperately keen to assist at weekends and before and after school. Goodness only knows how many days they’ll be ‘off sick’ from school on the run up to Scotsheep!