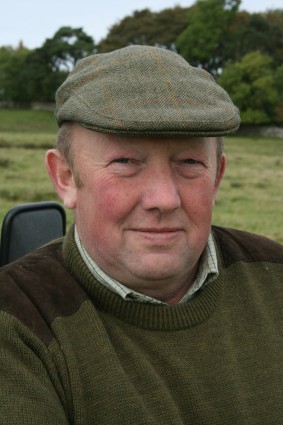 While understanding the breeding in a bull’s pedigree is a top priority for all breeders looking for new herd sires, it’s not always the first thing that commercial buyers take into account. But when it comes to choosing Limousin bulls to sire the suckled calves produced on two hill farms owned by a Cumbria estate, breeding is just as important as conformation to farm manager Stephen Lord.

Levens Hall Estate has two hill farms – Forest Hall at Selside near Kendal and Gaythorne Hall near Appleby. The two units carry a total of 150 suckler cows and run a team of six Limousin bulls to produce the annual crop of suckled calves sold at around 12-months-old.

Stephen Lord is a staunch supporter of the Limousin and can recall his family being among the first in the county to use a Limousin bull. “I bought my first Limousin bull with my father in the early 1970s. We were passing a field of continental cattle over in West Cumbria and had been impressed by what we’d read about Limousins. We called at the farm and ended up buying a bull that had just been imported from France,” he recalls.

The bull went to work in the family’s dairy herd and it was those early dairy-bred cattle – and the ones that followed by early imports like Fanfaron – that were responsible for the support he’s had for the breed ever since.

“The Limousin is a fantastic breed – simple as that. It’s a world breed that produces such a level type wherever it’s used and what ever it’s put to and it’s that ability for bulls to breed so consistently that has been the Limousin’s big attraction to commercial beef producers.”

When Stephen Lord took over as manager of the two farms, owned by the Bagot family of Levens Hall near Kendal, he introduced the Limousin influence with the purchase of 40 black Limousin-cross heifers and bought a bull to go with them from the late Tommy Holliday’s herd at Coniston in theLake District. That was followed by a Broadmeadows bull from Douglas Crighton to set the seal on the long-term future of the two upland suckler herds.

Forest Hall Farm is run organically. There are 50 suckler cows – “now mainly sired by Limousin bulls with a switch of British Blue in them” – and all put back to the Limousin. The herd calves May/June with calves sold as stores the following February to several established customers. A few are hand-picked as potential show calves and sold conventionally through the suckled calf sales at the local auction mart. 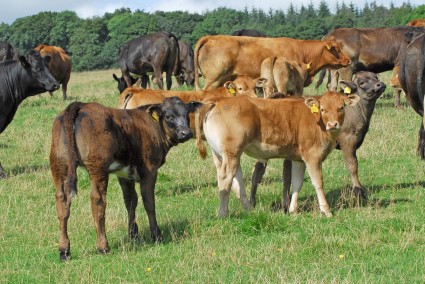 On both the estate’s hill farms the cows are turned out to calve in the spring and run with the bull from August. Bulls stay with the cows until Christmas. Cows and calves are housed in October with calves given access to 2-3kg a head a day of creep. Calves are weaned around Christmas time.

There are currently two bulls working with the organic herd at Forest Hall Farm. One is from George Hutton’s Cloughhead herd and is shared with Robert Hayton of Asby Grange, Appleby. Cloughhead Usher is by Petunia and was bought in Carlisle for 6,000gns on the same day that Cloughhead Umpire made 45,000gns.

“He’s done a great job for us and we’ve retained some of his daughters as herd replacements. He’s out of a Cloughhead Jurassic cow,” says Stephen.

The Forest Hall herd is also being served by aMalibuson out of a cow by the good producer Cloughhead Charlie. “I like the Cloughhead breeding; it delivers the right type of calves for us as suckled calf producers. We particularly like the type of calves we get from a combination of Charlie and Heros; it works well and gives us a really level run of calves. We want to know that the last calf through the ring will be as good as the first – that’s very important.”

But when Stephen Lord considers a bull it’s the pedigree that has to be right before anything else. “If the breeding isn’t what I want I’m not interested. When I get a catalogue for a Carlisle sale there may be three bulls that I’m interested in. I might not need a bull at the time but those are the bulls that I want to see and make a judgement on.

“Breeding is two thirds of what you’re trying to produce and if you know what works for you I like to stick with it.” He likes a bull with a good topline and length but he doesn’t want bulls that are too extreme in the hindquarter. “And I need a bull to be exceptionally good on his legs and feet.  Bulls have to work on concrete for part of the year and they have to have good legs and feet to cope with that.”

Cloughhead Usher initially went home with George Hutton after he was bought by Stephen at the Carlisle sale. When he called to collect him he spotted another bull that took his fancy. “The bull was the Genial son Cloughhead Uist and he was booked to be sold at the next Carlisle sale. To me he was a tremendous bull with everything I look for. When he was sold he made 10,000gns.

“He’d been used on a few cows before he was sold and we bought one of his sons – Cloughhead Armada.  Cloughhead Uist’s dam was one from a good flush from George’s cow Ruadh Thelma and Heros.

At the Kirkby Stephen cattle sale in May 2009 a heifer calf by Armada sold for the top price of £1,350. Buyer Mike Dickens,Milton Keyneshad a good run of prizes with this heifer during the summer shows.

Another calf – by a bull from John Smith-Jackson’s herd atHighTown, Haltwhistle – took the championship at the same sale and made £1,300. “We’ve had some good bulls from John’s herd over the years and like the sort of calves that come through from the influence of Shire Apollo – and we’ve retained a lot of cows by Apollo’s sons.”

The Gaythorne Hall herd of 120 cows runs on fell land close to Crosby Ravensworth. There are several bulls including Procters Ranger – a Neutron son bred by herd manager Gary Swindlehurst and bought privately in 2002. “I saw Neutron as a young bull and felt, just by the shape of him, that he was the type of bull that suckler men should be heading for.

“And I was impressed by Talent at the Smithfield Show many years ago and went to buy a son of his from Broadmeadows.  If I see a bull I really like I’m always interested to look out for one of his sons.”

One of the latest arrivals is a senior bull bred in the Fieldson herd but bought from John Smith-Jackson. He’s by Greenwell Mike and traces back to Igolo.  A youngster bought privately this summer has come from Steadman & Judy Dodd – Redrock Domino – who is by the Genial son Cloughhead Ace and traces back to Heros. “Because Cloughhead Armada has done so well for us I was tempted to go back into this breeding for another helping,” says Stephen.

When selecting bulls he takes figures into consideration “to some degree” but they aren’t the deciding factor. “We’ve realised over the years that once you’ve found the breeding that works for you it’s best to stick with it or stay pretty close to it as much as you can.”

Stephen’s a big supporter of the store cattle sales at Kirkby Stephen Auction Mart run by Harrison & Hetherington and has been selling at the May sale for over 20 years. At the May cattle sale in 2009 the estate’s 70 stores averaged £740 a head and took the championship.

“These sales attract really top quality cattle. The main May sale will pull in an entry of over 1000 head while the autumn fixtures are just as popular with buyers and sellers.

“I always say that you don’t have to walk too far when you’re at Kirkby Stephen Auction Mart before you’re among some tremendous cattle. There aren’t many sales where you’ll find such good shows of cattle from start to finish.”