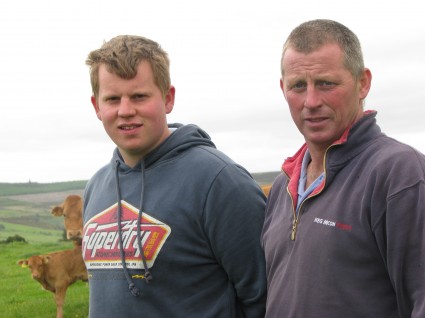 With several members of the Nixon family relying on the income from Stotsfold Farm in Northumberland, it’s essential that profits from the beef enterprise are maximised. That’s why they’ve chosen the Limousin – a breed which they believe has no serious rival in the marketplace.

The family farming partnership at Stotsfold includes Clive and Gillian Nixon and their son, Dan, along with Clive’s mother and father, John and Shirley. Clive’s brothers, David and Keith, are also involved in the business. The land is spread across three separate upland farms, a few miles apart. In total, the family owns 600 acres of grassland, with a further 70 acres of rented land, as well as grazing stints.

Like many other holdings in the region, the foot and mouth crisis proved a catalyst for change at the farm, which is near Hexham. While the animals did not succumb to the disease itself, they were classed as a contiguous case and all the livestock were culled. Prior to the disease outbreak, the family ran a purely commercial herd, comprising mainly Limousin-cross cows out of dairy females, put to a Limousin bull. There was also a large flock of sheep, with 1,200 Swaledales kept for breeding Mules, which went to the Texel tup.

After re-stocking, the family’s loyalty to theLimousinplayed a pivotal role, and they decided to establish a small pedigree herd, using Stotsfold as their prefix. Today, there are 70 three-quarter Limousin females, 50 purebred Limousins and around 20 pedigree cattle. Flock numbers now stand at 950 breeding ewes, including 550 Swaledales.

For the past four years, the family has switched from finishing cattle at home, to selling stores, which go through their local auction marts at Longtown and Hexham. Clive feels it is important to maintain flexibility when selecting cattle for sale, so there is no strict rule about age and weight. Instead, he keeps a close eye on price trends.

In 2009, May-born bullocks averaged £1,105 apiece at 21 months old, while heifers achieved a £980 average at a similar age. However this year, with straw prices rocketing and a shortage of grass, most of the cattle were marketed at 12 months of age, averaging £758/head. Clive admits that he was caught out this season, as the price increased by £50/head, just one week after he sold a sizeable batch. It seems that price volatility in the market is here to stay, and therefore he may try to reduce risk in the future, by staggering sales over a longer period.

While the sale of breeding bulls is a fairly recent occurrence at Stotsfold, the stamp of cattle produced on the farm has been finding favour with buyers. The most recent consignment averaged 4,500gns, but the best price achieved to date is 10,500gns, which was paid atCarlislein October 2006 for Stotsfold Astonmartin, an Oxygene son. Buyers were RM & TR Davies of Builth Wells. At the Carlisle sales last October, Hazel Fotheringham of Stirling,Scotland, successfully bid 7,500gns for Stotsfold Dragon, a Ronick Hawk son out of Sarkley Annette.

Long and tall, with a good back end and a background of high growth rates, is how Clive describes the type of bull he looks for when selecting new bloodlines. Performance figures are given some consideration – he is not interested in animals with growth rates that fall below average, for example. However the main method of judgement is by eye.

“We like length in our cattle; smaller animals don’t suit our purpose, even if they have a good back end,” he says. “High growth rates were very important when we were finishing cattle, and the same principle applies now that we are selling to the store market. We want buyers to come back to us on a regular basis.”

At home, the family is justifiably proud of stock bull, Stotsfold Cowboy, sired by the French bull, Silex. They are also using Brontemoor Ronick, a Ronick Hawk son.

Purebred females are usually served by AI, with any returns being picked up by the stock bull. AI sires that have been used extensively over the herd include Wilodge Tonka, Rocky and Sympa, and a small percentage of the best cows have been flushed for embryos.

One cow which has made a great contribution to the herd is Gallowshieldrigg Sudabeh, which made the top price of 2,000gns at a 2003 production sale on behalf of Ali Afsari of Blackhamilton, Blackford. Bought by the Nixons as a July 2001-born heifer, she is by Genus Hidalgo, out of the Djerk-sired daughter, Gallowshieldrigg Natalia.

Sudabeh had a Beef Value of LM+31, which placed her in the top 1% of Limousin recorded animals. She has produced three exceptional bulls, which have made 10,500gns, 10,000gns and 6,200gns respectively.

The family’s loyalty to the Limousin as their ‘breed of choice’ is unwavering. However Clive has one point to make, about the way that bulls are produced for the major sales.

“We feel that some bulls are too well fed in the run up to sale time. We have been criticised for our bulls lacking cover, but we feel they need to be fit and ready to work soon after they are taken home. Our land is fairly harsh, and we want to avoid introducing new bulls that lose condition rapidly once they are turned out.

“Despite our opinions on this issue, we believe that commercial buyers also have to take some responsibility. The bull needs to be properly looked after – it’s no use leaving him to fend for himself and then expecting him to look as good as he did at the sale, six months after purchase.”

When it comes to cows, milkiness and ease of calving rank high on the list, he adds.  “We don’t want very large cows that have a tendency to run to fat, while their calves are deprived of milk,” he says. “We find the Limousinto be very easy calving, and we only intervene in a handful of cases each year. We haven’t had a cow that has needed a caesarean for over 10 years now.”

The 40 or so May calvers are turned out at the end of April, with the stock bulls joining them in mid-July. The cattle are usually brought into the cubicle housing during mid-October. The Nixons have found that calves fare better when they are left with their dams, and therefore weaning does not take place until mid-February. 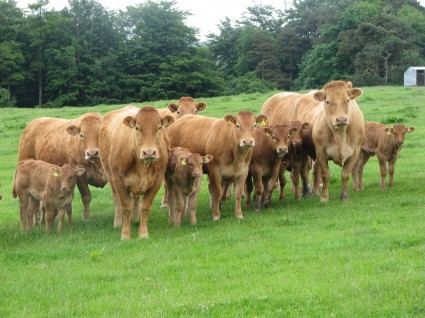 The 100-strong autumn calving group is calved outdoors, as long as the weather is suitable. They go out in May with their calves, which are weaned at the end of July. In general, heifers are weaned at around 300kgs, with bullocks at 350kgs.

As a matter of routine, all the breeding cattle are vaccinated, to protect against BVD and leptospirosis, with older animals receiving a trace element and mineral bolus, as the farmland is slightly deficient in iodine. Clive points out that health status is becoming increasingly important to store cattle and breeding bull buyers. For this reason, the herd is virtually closed, with any bought in animals subject to a strict isolation period and rigorous testing.

The farm’s situation means that options are limited when it comes to cattle feeding. Silage and bought-in concentrates form the staple diet, with family members also silaging and straw baling on a contract basis for some of the neighbouring farms.

It’s no easy task farming the land at Stotsfold, which starts at around 750 feet above sea-level and rises to 1,400 feet on the fell top. Clive’s parents moved to the holding in 1963, when the farm consisted of just 240 acres of rough land. It has been hard work, but around 150 acres have been improved by judicious drainage, with rushes and heather re-seeded, and turned into productive grassland.

The entire farm is classed as an SDA (Severely Disadvantaged Area). Stocking rates are close to the limit, and this factor has made the family reluctant to apply for Higher Level Stewardship, although they may consider entering the scheme at a later stage. The ability to adapt and change to suit market requirements should stand them in good stead for the future, but there is one factor that will remain constant, and that’s the choice of cattle breed, says Clive.

“Cattle with good conformation will always top the market,” he points out. “Other breeds may produce excellent cattle which will attract high prices on occasion, but the Limousin is the only breed that will deliver top quality beef animals on a consistent basis.”