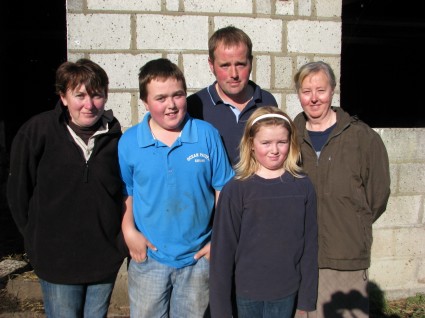 The Mackley Family is a shining example of the progress that can be achieved through sheer dedication and hard work. They credit the Limousinwith helping them as they strive to achieve their goal, which is to build up a herd of 200 commercial cows and 50 pedigrees.

Edward Mackley and his wife, Sarah, are ably assisted by their children, Joseph and Isabelle, both of whom are very keen on working with the cattle. One demonstration of the family’s commitment to farming is the amount of travelling they have taken on, due to a shortage of rented grazing available locally.

The home farm, Mount View near Scarborough, is just 40 acres, and therefore a further 500 acres are rented. Most of the tenanted land is situated on an estate almost 20 miles away, so the family make frequent journeys to check on their animals.

Currently, the herd comprises 110 mainly commercial Limousin females, as well as 20 pedigree cows, registered under the Mountsted prefix. All the cows are put to a Limousinbull. The herd is mainly spring calving, with a smaller group of cows calving in the autumn. The cattle spend the winter in straw-bedded open yards at the home farm.

Traditionally, the Mackleys have finished all the youngstock that are not required for breeding, selling them through the local auction mart at Malton. On one occasion, a batch of 13 store bulls averaged £820 apiece, and reached a top price of £920 at the age of 9 to 10 months. However, the family is considering a switch to marketing suckled calves, with the idea of reducing feed costs and allowing them to fully concentrate on increasing the size of their suckler herd.

When it comes to breeding policy, Edward points out that theLimousinhas been the family’s breed of choice for many years. Edward’s mother, Mary, started out with just two cows some 30 years ago, and it was not until 2007 that the business reached the size where Edward felt confident enough to leave his full time job as an engineer for British Gas, to focus on the farm.

“My grandfather, Joe Chapman, taught me a lot about livestock,” says Edward. “When I was at school, we had just a few cows at home, but I was always enthusiastic about helping out.

“The smallholding couldn’t support me when I had to start looking for a job, and that’s why I went out to work, although it was always my intention to return to work at home. It wasn’t easy while I was working elsewhere, but Sarah is just as keen on the cattle as I am, so a lot of their day-to-day care fell to her.

“It is just as well that I was in regular employment when BSE and foot-and-mouth disease struck, otherwise I think we might have had to give up our plans for expansion.”

Width of topline is the one of the most important factors when selecting AI sires, says Edward. Recent choices have been heavily biased towards the Wilodge prefix, and include Tonka, Vantastic and Vivaldi. Clydevalley Arty, Dauphin and Sympa are among the other bulls selected.

Mr Mackley would like to use AI more extensively, but feels the scattered grazing land makes the idea impractical. However, the purchase of a mobile handling system has made life a lot easier, he comments.

The farm carries several pedigree stock bulls, and the eight year old Proctors Subaru has performed particularly well. He was purchased at Carlisle in 2009 for 2,600gns, having been put forward by Steven Priestley, who runs the Brontemoor Herd at Hill Top Farm, Denholme, Bradford. Subaru has produced calves with exceptional muscling, and his female calves are to be kept for breeding, to continue the improvement of the maternal lines, says Edward. Other AI bulls used over the years include Ronick Hawk, Dyfri Grand Prix, Genus Habitus and Hartside Jacko.

“Temperament is a very important consideration for us,” says Edward. “Whenever possible, we like to go and visit the cattle as a family. The children are supervised, of course, but we cannot afford to keep aggressive animals in the herd.

“Ease of calving is also a priority, although this trait is pretty much standard across theLimousinbreed. We have never had a cow that needed a caesarean.”

When asked to describe the type of cow he favours, Edward has a very clear picture in his mind.

“She needs to be hard-wearing, not too large but with a decent-sized frame, and correct in the feet and legs. At present, I’m looking to increase milk yield slightly, so I’m also looking for that quality. The figures for fat must not been negative, because our cows need some covering, to carry them through the winter.

“I’m also drawn to animals with an attractive head. I know that it’s not a commercial trait, but like many other producers, I get a lot of pleasure out of looking at my livestock, so I want something that is pleasing to the eye.” 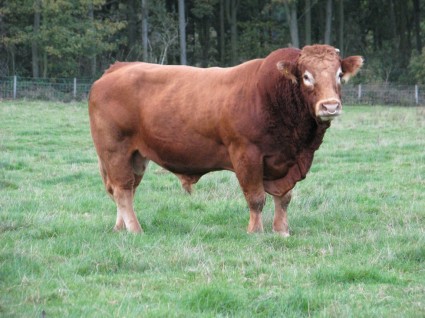 The family’s efforts to grade up the herd and achieve uniformity in their growing cattle have led them to use heat synchronisation. Some 50 cows, split into two batches, have recently been artificially inseminated. Scanning revealed a success rate of 82%, a result that has pleased Edward.

The feeding system for the cattle has changed from a traditional silage and concentrate diet, to mixed ration based on straw. Other feeds, such as fodder beet, potatoes and swedes, are added according to price and availability, and balanced with bought-in blends. Edward believes the cattle are performing better on the ad-lib diet, and he enjoys watching them lying down and cudding contentedly.

“We make very little silage nowadays, as it is quite expensive to produce,” he says. “There are a lot of arable farms in this area, so we have the opportunity to swap farmyard manure for straw, making it a comparatively cheap source of feed.”

Summer 2010 was the children’s first entry into the word of cattle showing, and they have already picked up several prizes for their homebred youngstock. Isabelle won the junior handler championship at the local show in Rosedale, and came second in her class at Thornton. Their latest show prospects include a heifer by Middledale Buster and a Limousin-cross, sired by one of the family’s favourite bulls, Mountsted Viceroy.

Asked why the Limousinis so important to him, Edward finds it difficult to know where to begin.

“Durability is one of the first words that comes to mind,” he says. “Some breeds of suckler cow will only produce six or seven calves. But we have several that are over 20 years old and still going strong. In fact, we have recently sold a finished bull weighing 560kg that achieved a price of 185p/kg at auction. It was out of a 20 year old cow, which is now back in calf again.

“The Limousin offers so many more marketing options, compared with other breeds. There are plenty of buyers looking for finished bulls, bullocks and heifers and breeding stock. Butchers in particular like them because of their quality carcase with minimum waste.

“It’s no coincidence that Limousin bulls command the largest market share, as they will perform consistently well in a variety of farm situations. The breed means everything to us, it is the foundation of everything we are working for, and our livelihood depends upon it.”