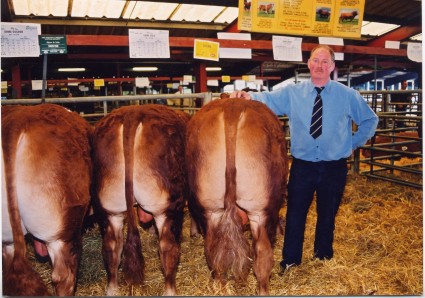 The Shire Herd owned by Doug and Carol Edgar and their son Jack of Fellside, Ousby near Penrith, Cumbria, has been recognised by EBLEX as the Most Improved Herd of British Limousin cattle in 2010.

The award is presented by the EBLEX Beef Better Returns Programme (BeefBRP) to the recorded herd that shows the greatest genetic gain for commercial traits over a 12-month period.

Well-known in Limousin circles, Doug Edgar breeds, sells, shows and judges Limousin cattle, and has served nine years on the British Limousin Cattle Society’s Council of Management. Over the years the family has had many successes at shows, including the Supreme Championship at the International Limousin Congress 2004 with their bull, Grahams Samson.

Mr Edgar’s interest in the breed started in 1979 with the purchase of one heifer, followed by seven more imported from France a year later. He chose the Limousin breed because he felt it offers everything a butcher wants in terms of meat yield and quality; while the breeding females, which consistently produce good quality calves, milk well, and are suitable for both commercial and pedigree herds.

The Shire Herd is based at Fellside – 850 ft above sea level, in the heart of the EdenValley. The 60-head herd share 100ha of mainly permanent pasture with 320 breeding Swaledale and Texelor Beltex cross sheep. Barley is grown on 12 ha for home use.

Attending the major pedigree sales, Mr Edgar spreads calving so that there is a regular supply of bulls for his customers. The cows calve indoors during the long winter. Calves are creep fed and weaned at seven to eight months of age. Most of the bulls are sold privately and some are hired out. Ten per cent of the heifers are kept as replacements. ‘The best of the rest’ are sold to pedigree producers, and some go into commercial herds.

When choosing a bull Mr Edgar looks first for a calm temperament and then for overall size and conformation with plenty of length and good legs. He records the performance of all his cattle and uses the information to help decide which animals to keep for breeding. 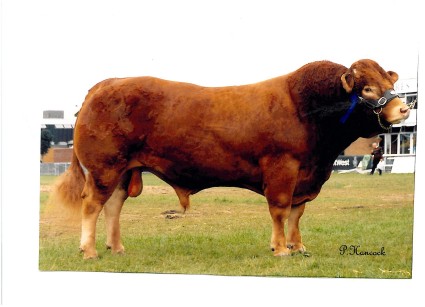 Commenting on winning the award Mr Edgar feels that the purchased bull Grahams Samson (the then world record priced Limousin at 50,000gns) has had a significant influence on the herd, as has home-bred Shire Milton, who has exceptionally good figures for milk production and muscling.

“Achieving a double combination of desired traits doesn’t happen very often, but it is a great bonus when it does,” he says.

Stephen and Martin Irvine of Anside Limousin, Braehead Farm, Aberdeenshire run 65 pedigree Limousin son a 150ha mixed farm. They first used semen from “Shire Cyclone” in the early 1990s and purchased Shire Lucky from Mr Edgar in 1996. They kept him until he was six years old and still have progeny of his in the herd.  Lately they have used AI to introduce new bloodlines and to access bulls used in the past.

When selecting new sires they use EBVs, particularly those for muscle depth, ease of calving, gestation length, and 200 and 400 day growth. The best bulls are sold through Carlisle, Stirling andAberdeenbull sales at 14 to 24 months of age; the rest are finished and sent straight to killing at 14-16 months, achieving carcase weights of 600-800kg.

“Doug is a great character and we have got to know him well,” says Martin Irvine.  “We recently went to see the Shire herd and were most impressed by the big, powerful, sweet cows.  Their temperament was exceptional.  He has the right bloodlines and has focused on the best genetics. On the strength of what we saw we purchased seven lovely heifers, and 30 straws of semen from Shire Cyclone and Shire Milton.”

“While beef prices are relatively high, now is the time for pedigree and commercial producers to capitalise on improved breeding,” says EBLEX breeding specialist Samuel Boon.

“It is definitely worth taking time when buying stock bulls and replacement heifers to source genetics that will have the greatest economic impact on the herd.

“By recording the performance of their animals, pedigree producers like Mr Edgar are allowing other farmers to make informed purchasing decisions rather than leaving it to chance, and hoping the chosen animals will deliver on commercially important traits.

“I congratulate Doug, Carol and Jack on the excellent job they have done with the Shire Herd and the Limousin breed over the past 30 years.”