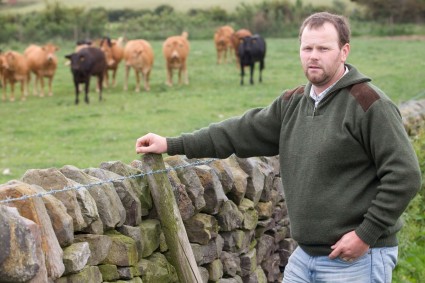 A family with connections to a livestock auctioneering business has chosen the Limousin as the main breed for its suckler herd and finished cattle enterprises.

Rudda Farm belongs to Doug and Rachel Gascoine, who trade as Gascoine Group Ltd, a business which runs Newark Livestock Market. The family also owns a holding in Nottinghamshire, which is where all the livestock produced at Rudda are sent for finishing.

The farm, which is based near Scarborough in North Yorkshire, comprises 500 acres of grassland, the majority of which is reclaimed moorland. Situated just half a mile from the coastline, the highest point on the farm is 700 feet above sea-level, making it a challenging environment that demands hardy animals. They need to be equipped to cope with adverse weather conditions, and the Limousin fits the bill perfectly. Despite having been extensively drained, the land is wet, and is therefore unsuitable for out-wintering.

Before his arrival at Rudda four years ago, Farm Manager Stewart Robertson worked on a beef and sheep farm, just south of Edinburgh. On taking up his new position as Farm Manager, he inherited a herd made up ofLimousincrosses, many of which were born pre-1996. Farm policy is overseen by auctioneer, Paul Gentry, a familiar figure at Newark Sales. He is witness to many thousands of cattle going through the sale ring each year, and brings his valuable experience to issues such as bull selection.

The 300 breeding females at Rudda are housed in straw yards, with spring calvers fed a silage-based diet. Meanwhile, autumn calvers also receive brewers’ grains as part of their ration. Calving is carried out in ten weeks blocks during autumn and spring, and takes place outside wherever possible, to minimise the risk of disease. Stewart is gradually moving the majority of the herd to calve in the spring, as he believes the reduced reliance on bought-in feed requirements makes this group more profitable.

To date, natural service has been used exclusively across the herd, however Stewart is considering a move towards AI, particularly for the autumn calvers. He points out the difficulties involved in getting the autumn calvers back in calf, especially at a time when grass quality is diminishing. It is a real challenge to get sufficient energy into them, to set them on an upward plane of nutrition, he comments.

The cattle breeding policy is focused on keeping replacements that will grow into large-framed cows, with the potential to produce calves with good length, high liveweight gains and top quality meat. The herd currently includes 25 pedigree Limousins, which are registered under the Gascoines prefix. These were mostly purchased at Carlisle in 2007, as bulling or in-calf heifers.

Many of the females in the herd are linked to two Mereside bulls, bred by Roger Hazard & Sons, Saltby Heath Farm, Grantham, Lincs. Mereside Paddy, by Wheatsheaf Laird, is no longer in the herd, but used to be one of around a dozen bulls generally kept on the farm. He was Senior Champion atCarlislein October 2000 and sired more than 300 calves at Rudda.

An Imperial son, Mereside Tobias, was Junior Champion at Newark and Lincoln Shows and used as a herd sire at Mereside, before being purchased by the Gascoine Group. Another major influence has been the 9,000gns Dinmore Bentley, a full ET brother to Dinmore Bandit, which was Champion at Carlisle and was later knocked down at 28,000gns. Meanwhile, Coachhouse Ambassador was considered a great buy at 4,000gns, and has made a tremendous contribution to the herd.

Goldies Conquest and Dinmore Escort are two other stock bulls that are rated highly. Conquest, a 2007-born Wilodge Vantastic son, is out of the Epatant-sired Goldies Una, whose dam line goes back to Ronick Inkley and Broadmeadows Ainsi. He came second in his class at the February 2009 Show & Sale at Carlisle, where he was secured by the Gascoines following a successful bid of 12,000gns. The bull was bred by BT Goldie of Townfoot, Mouswald, Dumfriesshire.

Wilodge Vantastic obviously suits the type of cattle the family is aiming to breed, because Dinmore Escort is also a son of the noted bull. His full sister was Champion at the Royal Welsh, and his dam is Aghadowey Alix, a Broadmeadows Cannon daughter. He was purchased in 2010 for 5000gns, having been bred by Paul Dawes of Kipperknowle Farm, Dinmore Manor, Herefordshire.

Health status is considered extremely important at Rudda, and while the farm does not take part in any formal health scheme, every effort is made to maintain a disease-free herd. All the cattle are vaccinated against BVD and leptospirosis, and the calves are protected from pneumonia through the use of the Rispoval 4 vaccine.

“We work very closely with our vet, to keep the cattle healthy,” stresses Stewart. “We are a virtually closed herd, and any new bulls are kept in isolation, just to make sure they are free of disease. Fortunately, testing has proved that we do not have a problem with Johne’s.”

Spring calves are weaned around mid-November, depending on the weather, while autumn calves are not separated from their dams until early August. Keeping them suckling for longer prevents the cows from putting on too much weight before calving, says Stewart.

The practice of working in partnership, with another farm taking the cattle for the finishing period, allows Stewart and his two part-time staff to focus on the breeding herd. Young bulls are left entire, with all the calves moved to the Nottinghamshire holding after weaning. Once finished, they are sent to Newark Livestock Market, which is situated just a few miles away.

Since Stewart’s arrival, the herd size has increased by 50 cows, a move which has put pressure on space in the buildings, despite another shed having been erected fairly recently. Heifers selected as replacements are also moved to the other holding for the winter period, returning when the first flush of spring grass appears. They are usually bulled at 18-20 months.

“We haven’t sold any cattle for breeding yet, but it may be an option for the future,” says Stewart. “Everyone involved in the farm is keen on the Limousin, and we don’t think there is any other breed that can beat it.

“Our connection to Newark Livestock Market gives us access to a great deal of information on the performance and conformation of a variety of different types of cattle. We think the fact that we have chosen the Limousin above all others speaks for itself.”

Few breeds lend themselves to both maternal and paternal traits, but the Limousin “ticks all the boxes,” says Paul Gentry. He would like to see breeders continue to strive to produce top quality bulls that will sire fast-growing calves.

“I sell over 30,000 prime beef cattle per year, and the Limousin breed is the market leader, regularly topping the bidding,” he says. “Newark is the largest prime beef auction in theUKtoday, and it is not unusual to find that 80 or 90 of the top 100-priced animals are Limousin.

“After the cows have given a consistently good performance and have reached 12-14 years or older, they will still make you 130-140 pence per kilo in the ring.”