Established nearly 30 years ago, the Mereside Herd is without doubt one of the leading herds in the Eastern Counties, with a strong customer base buying both males and females from their Saltby Heath Farm at  Skillington, Grantham. 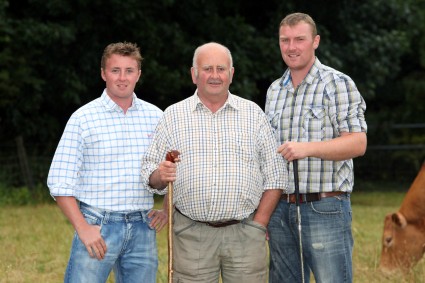 The herd, currently numbering just shy of 140 breeding females, was established in 1983 and is managed by Roger and Susan Hazard and their two sons Duncan and James. Together they farm 700 acres (wheat, OSR, barley and grass) on their tenanted farm on the Lincolnshire/Leicestershire border.

Messrs RM Hazard & Sons have a long and distinguished association with theLimousinbreed: Roger was Honorary President of the British Limousin Cattle Society 2008-2010 and James is currently serving his first term on its Council of Management. James is also Chairman of the East Midlands Limousin Cattle Breeders’ Club.

In addition to numerous County Show titles, the Hazards’ homebred bull, Mereside Crackerjack, was twice Breed Champion at the Royal Show and once Reserve Interbreed. Again at the Royal Show, Mereside bulls have been Reserve Junior Male Limousin on two occasions. Roger also has the distinction of having judged all three mainland “Royal” Shows: the Royal Welsh in 1992, the Royal Show in 1996 and, most recently, the Royal Highland in 2006. Sons Duncan & James have judged the Society’s Brecon Sale in November 2009 & 2010 respectively.

From the very start, the Hazards were determined to base their herd on some of the finest females they could afford. The early purchases that have formed high quality families were from Dan Haak’s Uplands Herd, the most successful being Uplands Tamara, who has been a prolific breeder and has 30-40 progeny or relations currently in the herd.

“We wanted females with great breed characteristics,” says Roger Hazard. “They simply need to milk well, have great longevity, good mothering ability and have a wide pelvis so as to calve unassisted.”

Other purchases included Lumbylaw Upside, Tankersley Trixie and Broadmeadows Urycine. All females were bought with one thing in mind, the potential to breed good hard working cow families, with plenty of breed character.

“The Lumbylaw cattle have worked particularly well for us,” adds Duncan. “One bred us Mereside Primrose who produced the bull Mereside Topman, who was sold at 15 months of age for £9,750 to Derek Frew’s Frewstown Herd in Northern Ireland and whose progeny has since gone on to win Northern Irish herd competitions.

The herd then grew at a dramatic rate and in order to introduce different bloodlines, 1992 saw the arrival of females Ginette, Gaelle and Gerbe from the late Pierre Gillet, La Bergeade, St Priest La Feuille,Francewho bred Talent. French breeding has since played a dramatic role in the herd’s success as regular bulls have been bought fromFranceand French females are still being added to the herd.

‘’We feel that the French-bred females have given us a solid foundation to breed cow families from,’’ says James. ‘’We follow very closely what is happening as regards to bloodlines in France and we have good contacts for information to import whether it be young bulls, females or semen.’’ It’s a method that is still in place today.

1994 saw the herd’s biggest investment to date in the form of the £12,000 French bull Imprudent. Bought to produce good, strong females with plenty of milk, he was also capable of producing stock bulls for the future, and moved the herd up to the next level, explains Roger.

The following year, numbers had built up so much so that the family held an on-farm herd reduction sale averaging £3,200. The success of that sale saw another in 1997, just after BSE, which averaged £2,300. In 2003, a further reduction sale of 50 head in Carlisle averaged £2,500.

Having gradually expanded since then, the Mereside Herd has firmly cemented itself as one of the most successful in the Eastern region. Their show record over the years has also been fantastic with one year alone resulting in 50 rosettes from four beasts at four shows. On the herd competition front, Mereside has been Champion Herd in the East Midlands Club Herd Competition in eight out of the last ten years entered.

The emphasis is now on building up the genetic base of the herd with the use of AI, a strategy which has been reaping rewards with sales off-farm of bulls by AI sires reaching a high of £9,000 in the last year alone. This was for Mereside Daytona, an Objat son, and out of the Obus daughter Mereside Binky. Having been entered for last May’s Carlisle Sale, he was bought ahead of the sale by Messrs Heald for their Coachhouse Herd based at Home Farm, Grove, Retford, Nottinghamshire. 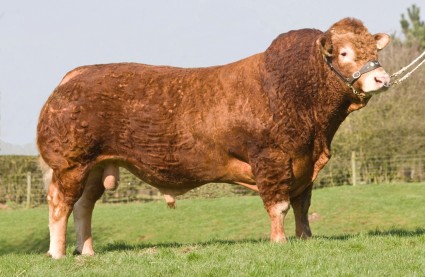 Demand for selling bulls off the farm continues to grow, and this has been helped with the launch of the herd’s new website www.meresidelimousins.co.uk. “The site has proved very popular and is helping us reach a far wider audience of both commercial and pedigree breeders, as well as prospective buyers of semen and embryos, than before,” reckons James.

AI now forms a huge part of the herd’s management with 80% of females calving to AI bulls. Plans are underway to expand the herd further with a push to go to 200 cows within the next five years. With the top end of the herd being put to the best sires possible, while the rest of the herd will be put to known, proven sires capable of producing good quality commercial cattle or to British Blue bulls with the aim to produce show calves or crossbred heifers to either keep for breeding or selling.

In terms of AI bulls which have been used in the herd, the noteworthy ones have been bulls like Objat and Tehix. “We were the first to use Objat in the UK and have some of the oldest daughters in the UK in the herd today. He is a bull with exceptional muscling, yet is easy calving and seems to have clicked incredibly well with our female base,” explains James.

“Tehix is a similar story, with Mereside registering the first progeny in the UK. Like Objat, he has proved to be a consistent breeder of medium-sized cattle with great breed character. Our plan now is to use the French-bred female base we have and to AI them with in-fashion bulls.”

But the star of the show now has to be another French sire in the form of Bolide. “Purchased in 2009 when he won the Muscle Class at the Brive Show, Bolide has great length, loin and hindquarter, making him ideal for both pedigree and commercial producers, a fact proven by him regularly making the best sellers list on the e-commerce website www.semenstore.co.uk since being marketed through it. By Neuf, he is out of Unibelle, and also has Ionesco and Highlander in his pedigree.”

The majority of the herd calves between October and December with the remainder calving in March and April, explains James. “We appreciate there is a cost of wintering the calf, but it suits our system as our land dries up during the summer months and that’s when we wean the calves off. This then allows us to have strong bulls to sell for breeding in the spring and to hit a premium with any bulls or heifers that don’t make the grade around Christmas time at Newark Market.’’  Calving at this time also makes it easier for us to artificial inseminate the cows,’’ he adds.

When the cows and heifers are brought in for calving they are given a mineral bolus and fed ad-lib straw and 8kgs of silage per day for maintenance. After calving, the females are fed a ration of maize and grass silage with 1kg of protein and minerals. Any bulls to be sold for breeding are fed on a bought-in coarse mix from Carrs Billington. Animals that don’t make the grade and being finished fat are fed a mix of home grown barley, molasses and a bought-in balancer blend – again from Carrs Billington.

Although a pedigree herd, the Hazard Family admit cows are managed on a commercial basis. “We are strict with what makes the grade to be sold as a breeding bull and what is retained in the herd as a female replacement or sold into other breeding herds. So anything that doesn’t is sold live weight through Newark Livestock Market.

Within the last year, 27 bulls at an average age of 13 months and 609kg live weight have sold to average £1,126 at 186p/kg. Heifers (also 27 head) have sold at an average age of 15 months to even out at £912.37 at 187p/kg.  “Newark Market is arguably one of the best markets along with one of the best auctioneers, in the form of Paul Gentry, for commercial and pedigree cattle in the country,” says Roger.

Animal health is an important consideration, too, and the Mereside prefix is a member of Hi-Health Herdcare, currently accredited free for BVD and monitoring for Johne’s with plans to test for Lepto and IBR this year. “We find that potential purchasers increasingly look at health when buying stock. They expect clearly presented health information and the CHeCS licenced schemes help provide this,” addsDuncan.

The family exhibit pedigree stock at Newark on the specialist Limousin sale days (April & October), and occasionally at Carlisle, but most bulls and females are sold from home with a solid trade from a regular customer base.