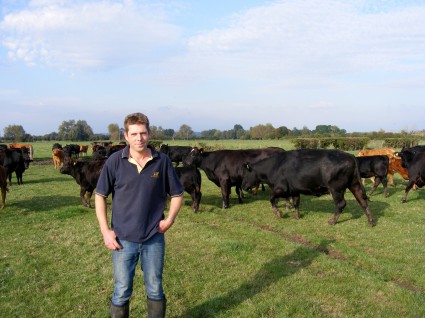 Church Farm, Steeple Ashton, Trowbridge, Wiltshire is home to a 335 head suckler herd run by FC Cottle & Son. Put exclusively to a battery of 9 Limousin bulls, the cows are predominantly spring calving with the calves sold as stores at around 6-9 months of age. Sold late October at Frome Market’s major store sales, it is the consistency of product which underlies the use of Limousin as a terminal sire. “We pay great attention to how we market our stock for the October store cattle trade,” says Jeremy Cottle. “Using a Limousin means we have either red or black calves that we can match up into even, uniform batches which are consistent in size, colour and shape.” It is this consistency that underpins this commercial Limousin herd.

FC Cottle & Son is a family enterprise run by Richard & Susan together with their two sons, Jeremy and Simon. Simon looks after the arable side whilst Jeremy concentrates on the livestock element. The farm is situated in West Wiltshire and sits in the shadows of Salisbury Plain which dominates the horizon. Comprising of 1440 acres, some rented, with roughly 650 acres of grass, 120 acres are put down to winter barley (straw for autumn feed) and 440 acres to winter wheat (straw for bedding) with a further 140 of oilseed rape. 50 acres are also set aside for linseed with the farm’s manure ploughed into the resulting stubble. The family business is complemented by one full-time worker, a farmer’s son, Simon Pike.

Jeremy’s grandfather bought the home farm in 1952 and the wartime Keevil Airfield extends onto much of the pasture land. This provides a very useful network of hard surfacing and means the land is less liable to poaching as a result of the day-to-day management and feeding of livestock thereby extending the use for grazing in the spring and autumn. The land is also crossed by two prominent tracks used by ramblers: the White Horse Trail and the Mid Wilts Way. “With two major footpaths crossing up and over Salisbury Plain, our cattle need to be quiet and I’m pleased to say that temperament has never been an issue,” adds Jeremy.

The 335-strong suckler herd is made up of around 160 Simmental-cross cows, 100 Limousin-crosses, 50 British Blue crossbreds, 25 Blonde-cross cattle together with a half dozen pedigree Limousin females under the Ashton prefix. The terminal strengths of the Limousin combines particularly well with the milkiness of the Simmental females. Approximately 25-30 replacements are bought in privately each year, generally Simmental x Friesian cows although it is a stated aim of the Cottles to start breeding their own replacements in the future. Calving takes place largely in the January to May period with a few autumn calvers. “We’ve had very few calving problems since we came out of using a different Continental sire a dozen or so years ago. The calves are now more uniform, not so extreme and what we really like is the thriftiness of the calves. Before, the calves were sleepy but now they get up and start sucking straightaway.”

In terms of bulls, this holding is the exclusive domain ofLimousinsires. AI is generally preferred on the handful of pedigree dams with Oxygene and Nouvelle Prospect semen having both been used. The pedigree herd numbers seven breeding females, with the first ever cows, Ovine and Finoise, purchased from the Hampton Herd of Dieter Jobst in 1981. These two French-bred animals had 9 and 10 calves respectively and formed the foundation of the Ashton pedigree herd. Other pedigrees include Columbpark April who was purchased at the South West Club Sale in Bristol in July 2009 along with her Rombalds Utah-sired bull calf at foot, Columbpark Eli. Columbpark April has since had another calf – this one being sired by stock bull, Holcombe Vital.

Other sires include Tregoze Veto, the homebred Ashton Bertie and Ashton Unique, Ashton Attwell as well as a pure but unregistered bull out of a Goldies cow by Maudleyn Scoobiedoo with Broadmeadows Cannon breeding on the sire side  bought  from Badminton Estates.  A recent addition to the Limousin bull battery is Stourhead Defender purchased for £3,000 from Harry Parker, Stourton, Warminster in March 2010. Defender is sired by Montgomery Taylor and out of Stourhead Natalie, a Broadmeadows VIP granddaughter. He is currently running with a bunch of 25 Simmental-cross second calvers and was bought for his length and shape. 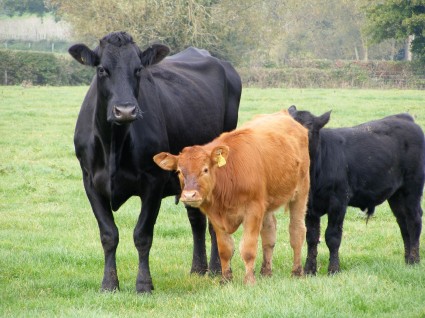 Cows calve indoors on straw, with a new purpose-built 80 x 120 ft building being put up recently to increase the housing available. Other management tools include an American Squeeze Crush purchased last year from Edward Penty and a reliance on Allflex tags with only one calf out of last year’s calf crop of over 300 having lost a tag and this year not one lost. “This must be some sort of record,” jokes Jeremy.

Females are all given an injection of Rotavac Corona a month before calving to reduce scours as a result of rotavirus. Calves are dehorned and the males castrated and then stay with their mothers until they are weaned 10 days before the store sales in order to give the calves time to settle down and reduce stress. Since the youngstock are not given any creep feed in addition to grass and barley straw, the milkiness of the dams is extremely important and cows which cannot keep their calves going due to loss of quarters for instance are not retained for breeding the following year.

The cows are turned out on or about April 20th to run with the bull and are brought in anytime between October and Christmas, as the weather allows. 80kg tubs of Crystalyx Booster are used ad-lib. “We vaccinate all cows against BVD around two months before they are put to the bull. This reduces reproductive losses, optimises calf health and prevents the birth of PI (Persistently Infected) calves,” notes Jeremy.

The pour-on wormer, Dectomax, is applied each July and September to help improve the condition of the calves. It also helps the offspring attain a nice, natural-looking sheen, says Jeremy.  “We don’t push our calves too heavily, preferring them to be naturally done so that they go on through the winter. “

Buying their stock out of Frome market are regular buyers both locally and from farther afield. “These buyers sell the best of their finished animals at 15-18 months and keep coming back to us as they achieve good growth rates and an optimum carcase,” says Mr Cottle. Buyers and market staff have also generally remarked how quiet the animals are.  In 2009, 235 head of both steer and heifer calves averaged £556 per head with best pen making £682. This year, trade has been a little down on last year as 186 averaged £519 per head, with best pen of steers to £660. Overall, 97 steers averaged £586 and 89 heifers £446. The Cottles prefer not to finish anything themselves;  if they did so it would mean cutting back numbers elsewhere so have decided there is more profit in selling as stores at this point in time.

Summing up,Jeremy Cottlesays: “The Limousin suits our needs perfectly as an all-round sire. Calves have the required shape, width of back and strength of leg and most importantly are born live and ready to suck. We’re then able to provide what our store cattle buyers want in even bunches: good stock that will go on and be profit-leaving for our customers.”