When the Hurford family moved from Devon to Cornwall in 1999, they had to find an enterprise that would replace the regular cash flow they had enjoyed in dairy farming. Giving up the dairy herd was a priority, as it would mean the two brothers, Robert and Graham, could run the farm without any outside help, but they were also keen that any alternative enterprise should replace the milk cheque and generate an income in every month of the year.

The brothers didn’t take long to find the answer in the Limousin breed, whose fast and flexible finishing together with consistently high grade carcases would assure them of a worthwhile income from September through to July. A dedicated contract to supply beef for Tesco (including the Finest range) through nearby St Merryn Meat further secured their income and the plan hasn’t faltered since the switch was made to beef production.

But the Hurford family – with parents Beresford and Jean who were also then involved with the day-to-day running of the farm – were not new to the breed, having first chosen aLimousinstock bull for their black and white herd around 20 years ago.

“We were very pleased with the results,” says Robert, whose subsequent attempt to replace the bull at Exeter Market some years later saw him return home with more than intended in the shape of a bulling heifer, a cow with a calf at foot and a calved cow.

“That was the start of our Limousin herd,” he reflects. “And by the time we left Devon we had about 10 cows.”

But with 520 acres at their new home at Borlasevath Manor Farm, St Wenn, south west of Wadebridge, numbers had to quickly increase to establish the new Oaklands herd, and to the 10 pedigreeLimousinsand around 40 Limousin x Friesian heifers from the dairy herd, purchased cows were added.

“We bought some animals privately but most came from Hallworthy Market in the days when you could get a cow with a calf at foot for around £600,” says Robert.

Today, the herd comprises 150 suckler cows, of which around 135 are pure Limousin or Limousin x Friesian from local dairy herds, with the remainder generally carrying some Charolais or Hereford blood.

“We like the extra milk that comes from the Friesian bloodlines, and we don’t really mind whether the offspring are red or black,” he says. “And if a dairy cross has a heifer calf we will usually keep it for the herd as these three-quartersLimousinsmake such good suckler cows.”

Management of the herd is a precision operation, with almost everything calving within the three months from March to May; weaning coinciding with housing in late October or early November; and uncastrated males housed until they are finished at 14-15 months. Meanwhile heifers are turned out the following spring for slower rearing, and those not kept as replacements are finished at around 21 months.

“Last year was the first time we experimented with uncastrated males to see if we could get a faster turnaround, and we found that we could achieve the same weight with the bulls at 14 months as we’d previously achieved from a steer at 24 months,” says Robert.

“People thought we were mad but we’ve been so pleased with the results that everything has been left uncastrated this year. They grow their frames quicker than the steers and lay down muscle rather than fat, and they’re generally averaging 390 to 450kg killing out weights at 14-15 months,” he says. “Three out of six that just left the farm graded E, and the best of the batch killed out at 483kg and graded E2 at 14.5 months.”

Perhaps more surprising than their performance has been their outstanding temperament, with the whole family convinced that the bulls are quieter to handle than the more slowly finished steers.

“The last lot that left the farm were so quiet we almost had to push them up the ramp,” recalls Jean.

The ration on which the youngstock have performed so well begins with an 18 percent protein cake from around 12 weeks of age, fed in creep feeders while the herd is at grass.

After weaning and housing, all youngstock go on to grass silage and stay on the same cake for two to three more weeks, at which point the male and female diets diverge.

“They go on to a ration of home grown barley and 34 percent protein pellets from Crediton Milling which are mixed in a ratio of roughly four-to-one to give an 18 percent protein feed,” says Robert. “This is fed at around 2 to 2.5kg/day to the heifers, and ad lib to the bulls, which consume between 1.5 and 1.75 tonnes of this feed over the rearing to finishing period.

“The heifers would eat less than half that amount as we don’t want to push them and want their frames to grow before they lay down fat,” he adds.

Turned out around mid-April, replacement heifers continue to receive 1.5kg barley plus minerals at grass, moving on to some 100 acres of SSSI land for bulling throughout their second summer.

“This is rough ground that’s in Higher Level Stewardship, so they have to be big, strong heifers to cope with the conditions,” says Robert, who adds that they usually won’t calve until they’re at least 30 months old. 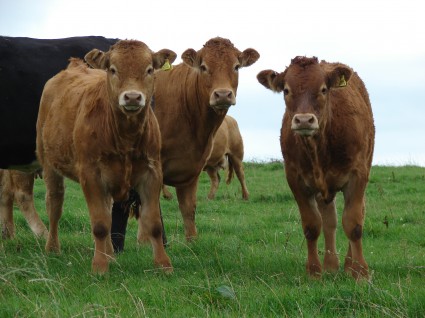 Other youngstock procedures include clipping their backs at weaning and routine injection with Rispoval 4, providing the stock with the all-important protection against respiratory disease.

“We had trouble when we first moved into this mild, damp climate and found we were having to treat several cases of pneumonia,” says Robert. “Now we prefer to prevent the infection if we possibly can, as the two injections before weaning represent a fraction of the cost of calling out vets and losing calves, and in my experience, an animal is never any good once it’s had lung damage.”

The sires to which the herd is bred are key to the whole system, with five or six Limousin bulls on the farm at any one time.

“The breed just seems to turn cereal and forage into lean meat better than anything else and is particularly suited to slaughter at 14 months,” says Robert. “They grade well – we have 85 to 90 percent U grades or better across heifers, steers and bulls – they kill out at 60 percent and more, and they have very few calving difficulties with lively, thrifty calves.”

Using all natural service, bulls are chosen with the utmost of care, with a high priority placed on the size of its head, which Robert believes has a significant influence on ease of calving.

“I’m convinced that a fairly small head and lower than average birth weight will give easy calvings, so we’re aiming for calves born to heifers at 32-34kg and those born to cows at no more than 38kg,” he says.

The herd testifies to the success of this policy and rarely experiences difficult calvings, seen last season in just three or four calves which had to be pulled.

Management at the time of calving is also meticulous, with Graham checking every night at 11pm and 5am and Robert rising at 2am routinely for a further check. Colostrum is also bottle-fed if not taken naturally within three hours.

“People may say why bother to get up,” explains Robert. “But you don’t necessarily lose calves through difficult calvings – you may lose them through something silly like membrane over their head that just needs removing.”

Other top priorities in the herd’s stockbull include long bodies and outstanding legs and feet, while the bull’s condition at the time of purchase is an important consideration.

“We’ve bought bulls in the past that have been so steamed up that they go to rag and bones when you work them,” says Robert. “They’ve also come back to haunt us by developing bad feet.”

Choosing both sires from local breeders and scoring a particular success with one from further afield, he names Wilodge Tonka, Cloughhead Anchor and Rainbow Simon as sires of three of his bulls – each adhering to his principle of transmitting lower than average birth weights, higher than average growth rates, better than average calving ease, and all with good docility.

And whilst he names Jack Neale’s Nealford herd as a favoured local source to which he routinely returns, a big hit of the moment comes in the shape of Ewdenvale Cracker – with Ronick Hawk in his sire line and Cloughhead Lord behind his dam – from Stephen Wilde in Sheffield.

“He’s been out with the herd for four months and he is still in good condition,” says Robert. “He’s got length, a good overall shape and a great temperament, and we’re very pleased with his offspring which are born easily and grow and grade very well.”

Ewdendale Cracker will doubtless remain with the herd for years to come, and as more of his, and other Limousin progeny go through the system quicker than ever before, time, land and buildings will be released for alternative uses.

“We’re considering how to use this opportunity for growth,” says Robert. “We could increase the arable acreage, or expand the herd, although in reality, I expect we’ll end up doing a bit of both.”