Will Corrie & Sons Committed to Quality and Improvement 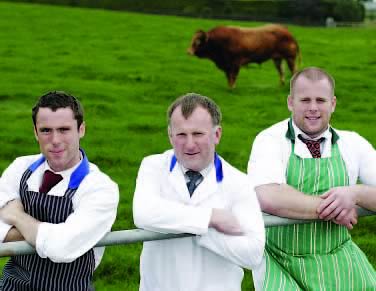 Will Corrie & Sons, who farm at Crossnamuckley Road, Newtownards, have been announced as the Northern Ireland Limousin Suckler Herd of the Year and Reserve National Overall winners of the British Limousin Cattle Society’s National Suckler Herd Competition for 2006. In securing the title, kindly sponsored by Caltech-Crystalyx, the Corrie Family took home a half ton of product from the sponsors to add to the £200 they had already acquired for winning the NI Limousin Suckler Herd title.

Master Judge – and last year’s winner – Mr Mike Scott of Thirlwall Castle, Cumbria commented: “I was impressed by the whole management approach – from gate to plate – the Corries have capitalised on the Limousin’s carcase traits of easy fleshing, high KO% and meat in all the right places.”

The Limousin National Suckler Herd Competition was introduced by the British Limousin Cattle Society in 2005 as a means of profiling commercial suckler herds demonstrating best practice, superior cattle management and all-round profitability through the use of Limousin genetics, both as terminal sires and suckler females. Entries were received from each of the eight UK Limousin regions and the preliminary competition, featuring eight nominated judges, established a winning herd from each. Overall, a total prize fund of £5,500 was paid out to the successful entrants. In September, judge Tom O’Brien had placed the Corries first in the NI region.

These are the requirements of Will Corrie and Sons, who farm at Crossnamuckley Road, Newtownards and who have just been selected top suckler herd in Northern Ireland in the British Limousin Cattle Society’s Suckler Herd Competition.

A delighted Will Corrie explained: “We used to buy stores and finish them and always bought quality animals no matter what breed. We have a butcher’s shop at the farm and noticed that the Limousin cattle we bought were fined boned and gave an excellent kill out percentage in addition to having fine textured meat. The Limousin cattle also finished very quickly and could be pushed for growth rate without putting on fat.”

As the customer base grew at the farm and Will’s son Gareth started a shop in Newtownards it was difficult to source enough quality cattle for the discerning type of customer that they were supplying. The family decided that they would like to have complete control over the cattle from birth to slaughter.

The suckler herd began with bought-in heifers and over the first few years severe culling took place until the Corries had exactly the type of animal needed for the premium market. They now have a 250 cow herd which are mostly three quarter bred Limousins and have 70 young heifers which will calve down next spring, bringing the total herd to over 300 head.

Philip Savage is the Farm Manager at the Corrie farm and has been with them for the past 20 years. He outlined the management programme: “The calves are born February to April and receive creep feed from 6 weeks of age. Heifers have enough growth to calve at 22 to 24 months of age and since the ground on this farm is fairly dry, cows and heifers can go out shortly after calving. The calves are weaned at 7 months by taking some cows out gradually over a period of two to three weeks, thus putting less stress on the calves. After weaning the cows are housed to dry off. They are kept on slats and receive a TMR mix of silage and straw. Nearer calving time they get minerals and concentrates are provided for any cows or heifers that need a bit more condition.”
“After housing, the calves also receive a TMR mix of silage and straw with some concentrates added. The heifer calves are finished at 16 to 18 months of age and the steer calves at 20 months. Last year’s calves had a DLWG of over 1 kilo per day and averaged 62% kill out over both steers and heifers. When the calves go to grass in the spring the best heifer calves will be drawn for replacements.”

Will Corrie points out that the other half of the equation is the sires used. He has paid good money for his Limousin sires and states that it has been a good investment. Currently there are 12 bulls running with the herd. One of the oldest bulls is Hartside Overlord which was the first bull he bought in Carlisle. He has bred very consistently and there is a high percentage of his daughters kept in the herd. The three most recent stock sires include Clydevalley Vandal from R and S Clyde, Templepatrick which was Reserve Champion at the Northern Ireland Limousin Club Show and Sale in Dungannon.

Whinfellpark Vault was purchased in Carlisle from A.Jenkinson of Cumbria for 4000gns , while Haltcliffe Viper came from the same area – from Messrs Ridley – and cost 12,000gns. He is an elite bull and was part of the winning Group of Three.

The increase in the herd has also necessitated the building of a new 300 head cattle shed which is in progress at the moment. Emphasis is on a natural environment where the health and welfare of the stock will be paramount. The cattle are to be bedded on solid flooring with wood chip or straw and have access to a slatted feeding area.

The butcher’s shop on the farm, which was started by Will’s father, had an interesting beginning. Will Corrie’s two uncles were butchers and would cut up an animal for the freezer for the Corrie family. They had a special room at the farm designed for this and a lady who was coming to see their new slatted house at that time saw a side of meat being cut and was impressed with the quality. She asked if she could have a side cut up for her freezer and a few days later her neighbour rang to say that she would take the other side. That was the start of a very successful butchery business which attracts customers from all over the province.

Will Corrie explained: “In those days a lot of people had large chest freezers and got a side or a quarter of beef cut for the freezer. The trend has totally changed now and customers want fresh beef and want selected cuts rather than a whole side. Some customers still buy for their freezer but it will be a bag of selected cuts such steaks, chops, mince etc. There is also keen demand for added value products that have stuffing sauces etc already added.”

The success of the farm shop prompted Will’s eldest son Gareth to branch out on his own with a butcher’s shop in Newtownards seven years ago. This has been a most successful venture and another son, William, plans to open a shop at Ballyhackamore on Belfast’s Upper Newtownards Road at the end of October.

Will said: “The secret of our success in the butchery trade is the Limousin breed with its fine textured meat and high kill out percentage, plus the fact that we have control of the product right from ‘calf to customer’ and can reassure the customer about the source and quality of our meat.”
He added: “This extra shop and the growing business in the other two shops means extra supplies of raw material. Therefore we are building up the suckler herd to strengthen supplies of our own Farm Quality Assured Beef.”

Breeding quality stock for the pedigree and commercial market

Quality and Consistency the Key for the Wrights of Hunthills