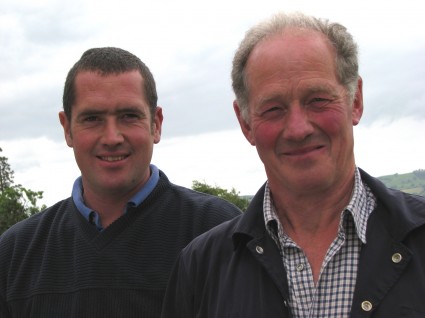 The family behind a farming business that has been buying Limousin bulls for many years believes the breed cannot be beaten. Ted and Merle Davies, and their son, Wayne, run their Limmy bulls with Limousin crossbred cows. The system produces top quality replacements that will stand up to the harsh winters in the hills near Newtown in Powys.

The Cwmbromley pedigree Limousin herd was established in the late 1990s, with numbers now standing at 25 females. They are run alongside the main herd of 90 commercial cows, which are mostly Limousin/Belgian Blue crosses. Having had a long history of using crossbred cows from the dairy herd, the farm has been producing its own replacements for more than a decade.

The 550-acre Cwmbromley Farm, which is a combination of owned and rented land, rises to 1,100 feet above sea-level. The lowland soil is a free-draining, medium loam. The farm has been in the family for three generations, and the balance of enterprises – beef cattle, sheep and arable – has remained fairly static over the years. A group of Suffolk cross ewes in the 850-strong ewe flock is lambed in February, with Charollais and Texel crosses lambing in March.

However the primary focus of the beef enterprise is the sale of finished cattle, with bulls left entire and marketed deadweight through a local abattoir. Most of the heifers go through the Celtic Pride premium Welsh-branded beef scheme, a joint initiative between Castell Howell Foods and Wynnstay Group.

Bulls are finished at deadweights of about 400kg at 14-15 months old. Around 85% of consistently achieve E grade, with the killing out percentage often reaching as high as 67%.  Meanwhile heifers, weighing an average 350kg deadweight, mostly fall into the U+ bracket. They take between 18 and 20 months to finish.

A handful of calves with show potential are offered for sale as stores each year. These are mainly sired by the farm’s Belgian Blue bull, which is used on the red Limousin females, once they reach their second or third calving. Limousin bulls generally run with the heifers and the crossbred cows, to produce replacements.

Wayne says the small, but growing demand for good quality store cattle has helped to push up sale averages and enhanced the reputation of the farm’s livestock. A ‘Show Potential’ event at Ruthin in February saw the Davies Family entering four eight-month-old cattle. Bids for one heifer rose to £2,300, after which she went on to win the champion baby beef class at the Beef Expo event in Malvern, Worcestershire. Buyers were Phil and Sharon Sellers. A second calf sold for £1,600, and the remaining pair went for £1,300 each.

The herd is split into two groups of equal size, for calving in March and April, and again in September and October. This policy makes best use of the 50-cow places available for autumn calvers in the buildings. Late spring and early autumn calvers mainly calve outdoors, although a straw-bedded area is provided for some of the spring calvers.

Wayne admits that is a constant battle to maintain an even calving pattern. He is still trying to bring the herd back into line, after a purchased bull proved to be infertile five years ago. Winters tend to be long, and turn-out is rarely possible before the end of April. The herd is in-wintered in cubicles with slatted floors and automatic scrapers. Spring calves are creep fed from August onwards, and weaned around Christmas time.

Some 50 acres are routinely sown with winter wheat, along with 25 acres of barley. The grain is fed back to the livestock, after being treated by a mobile crimping unit that is brought to the farm at harvest time. The aim is for grain at 35 per cent moisture, with the crop stored in a clamp and covered with black plastic.

“We used to feed dry rolled grain,” explains Wayne. “But we have found that we get a better quality feed by crimping, even though it is more expensive. It has been a cost effective way of improving growth rates and grading results.”

Just one cut of clamp silage is taken each year, without using an additive. With everything riding on the one cut, the Davies Family prefer to make their own silage, rather than using a contractor. Around 100 acres of grass is permanent pasture, while the remainder is managed using long-term leys.

With TB causing heavy losses within the industry, the Cwmbromley herd has not been without its problems in the past. Eight cattle were lost to the disease in autumn 2007, although the livestock have tested negative since March 2008. The herd is routinely vaccinated for BVD (Bovine Viral Diarrhoea) and Leptospirosis.

All members of the Davies Family are justifiably proud of their pedigree cattle, and they registered more than a dozen calves last year. Culling rates are fairly low across the herd – at least eight females that were born before 1996 are still producing a healthy calf on an annual basis. Cattle numbers have increased slightly over the past six years and sheep numbers have declined, because Wayne admits to a strong preference for working with cattle, rather than sheep.

In common with other cattle breeders, the Davies are always striving to improve the conformation of the herd. It appears that they are having considerable success. Cattle from the farm attracted strong interest when they were put on display at the British Limousin Society stand at this year’s Beef Expo. Along with a group of three-quarter bred heifers, they supplied two pens containing cows and calves.

The 1999-born Sarkley Panther was brought into the herd with the aim of adding thickness to calf conformation. Bred by Glyn Pennie of Llandyssil, Montgomery, the privately purchased bull has been highly influential. A son of the noted Muirhouse Lagonda, he has produced a large number of calves with show potential.

Although Panther is no longer in residence at the farm, he has proved his worth by siring the homebred Cwmbromley Boxer, a bull that the Davies Family hold in very high regard. 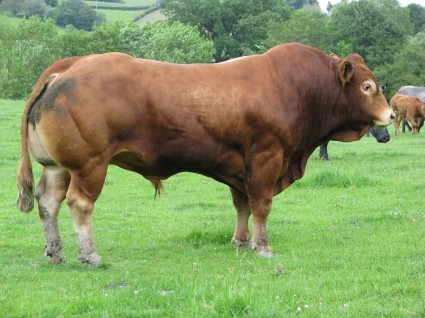 Sarkley Antonio, a son of Broadmeadows Cannon, was bought privately from the Pennies in May 2007. He is a full brother to Sarkley Voltigeur, as well as to Sarkley Sebastien, a bull which sold at Carlisle in May 2003 for 23,000gns.  “We chose Antonio because we wanted to slightly increase the stature of our cattle,” explains Wayne. “Glyn Pennie said he would produce good breeding cows, and he has lived up to expectations. His heifers are now 15 months old and we are very pleased with the way they have turned out.”

Wayne, who has worked at home with his father since leaving school, has never considered any career other than farming. He also says that he cannot imagine replacing the Limousin with a different breed of cattle.

“Having a pedigree herd gives us a bit of extra interest. We are still breeding up our cows, with a long term aim of increasing growth rates and producing calves with better muscling.

“It might take three or four years for us to reach the stage where we are ready to put forward breeding bulls at Society sales, although we have sold a number of bulls privately to other suckler herds over the past few years,” he says.