“From Birth to Plate”

AT THE CORRIE FAMILY, DRUMILLA FARMS 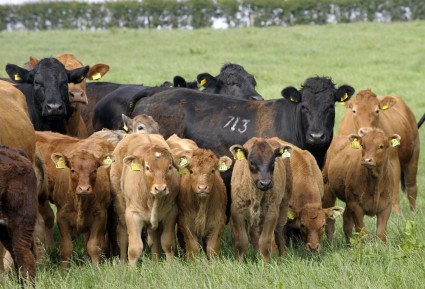 The Corrie Family Enterprise has its base on the Family Farms situated on the Ards Peninsula, not far from Newtownards in County Down, and consisting of two main farms, each of around 200 hectares, one being devoted to dairying and managed by Will and Rhona’s son, Richard, together with dairyman Clifford Carsewell, while on the other the entire emphasis is on the production – and subsequent sale – of the very best beef possible. That this objective is achieved can be measured by the demand for the finished product – beef in all its forms – in the Farm Shop and a further two shop outlets, one in Newtownards and the other in Belfast. Customer comments such as “lean, tender, tasty” or “melt in the mouth” back this up!

However, the production of an “in demand” commodity doesn’t just happen.  The Corries all have a hands-on managerial part to play with father Will, mother Rhona and son William, assisted by a total of fourteen other employed shop and office staff, taking responsibility at various levels for the butchery business while a further son, Gareth, assisted by with their long established stockman, Philip Savage, takes care of the farms and stock.

Some idea of the quality and extent of the Enterprise is felt when one drives up the attractive laneway, past the on-farm shop and into a farmyard, almost clinical in its maintenance, and developed in a manner which is labour saving to the extent that, in three hours, one person can feed and attend to some 900 head of cattle. Then you will realise that you have been allowed access to a very special place.

But this is about beef and how the Corries put some 45 carcases through their hands and into the care of satisfied customers each week.  Will Corrie is native to the area where the farms are based and, some 16 years ago, a beef suckler herd was formed.  At that time, this consisted of all breeds, with Limousin blood being introduced some 6 years later.  But why Limousin?  The quick answer comes from Will’s sons who work at the coal face of the enterprise:

Initially, while some consideration was given to breeding lines, the emphasis was on breed conformation although it would now be admitted that breeding is worth considering as well and the current high-quality 270-strong Limousin suckler herd gives ample evidence of considered selection as do the awards won in a number of BLCS and NI Club Herd Competitions.

Currently heifers for breeding-on are selected at 10 months and served to calve down, at 24 months old, in the three Spring months from 1st February.  In selection of these, attention is again given to conformation to breed standards while records of the milkiness of dams is also closely checked. At present some 150 Limousin-cross beef-bred calves are brought in from the dairy herd for finishing.

Sires – there are currently eight – are sourced at local Limousin Sales in Dungannon, at BLCS sales at Carlisle and in the Irish Republic at Roscrea and, it is stressed that, while paying “over the top” is not a practice within their management, quality of sires is recognised as of major importance.  The current practice is to source young bulls and introduce them to the farm’s feed and care management systems so that they are fully ready for work when required.

Calves are weaned at 6-7 months having been creep fed from 3-4 months and are slaughtered at around 2-year-old and at 300kg deadweight.  At the time of checking, of the last 120 graded, only four graded at 0+.  After weaning the cows are housed to dry them off. They are kept on slats and receive a mix of silage and straw.  Near calving time they get minerals with concentrates provided for any cows or heifers that need more condition.  After housing the calves also receive a mix of silage and straw with some concentrates added.   Calved heifers and cows go out to grass as soon as possible after calving and are run in batches of 30-40 throughout the grazing season.

When asked how Limousins have assisted the Corrie businesses it is emphatically stated that, from a butcher’s perspective, the boning-out aspect had a high value.  From the customer point of view, leanness, tenderness and tastiness were words often heard while on the question of profitability, a better yield of beef together with easy care and management were characteristics quoted. 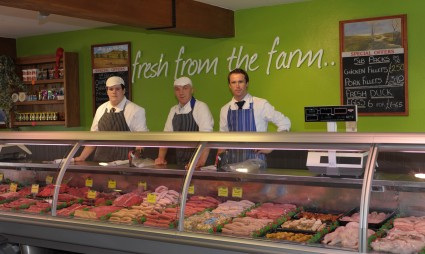 Whatever it is that makes the Corrie businesses tick, their willingness to bare their operations to breeders, cattlemen and the general public in an Open Day setting is much appreciated by the NI Limousin Club and there is not the shadow of doubt that a visit to Corries on 22nd August will be time very well spent, whether you come as a breeder, a beefeater or simply on an afternoon out.  There’ll be plenty to see and do.  Demonstrations, trade stands, play areas for the children, stockjudging and weight assessment events.  There’ll be food available but, perhaps of greater importance, the Farm Butcher’s Shop will be open and will stay open until 5.00pm. Or you might just simply wish to walk around and have a look at the various areas where Corrie stock will be on display, see their purpose-built housing and study their management systems.  You’ll be amazed!

DETAILS OF DISPLAYS AND DEMONSTRATIONS